Trading knowledge that can directly translate into decision-making is an essential part of financial education.

Candlesticks are the most popular way of identifying price movements of currencies. They are similar to box plots, and display the open, high, low and closing price points for specific timeframes. They work because every candlestick includes a great deal of information that line or bar charts cannot furnish at a glance. 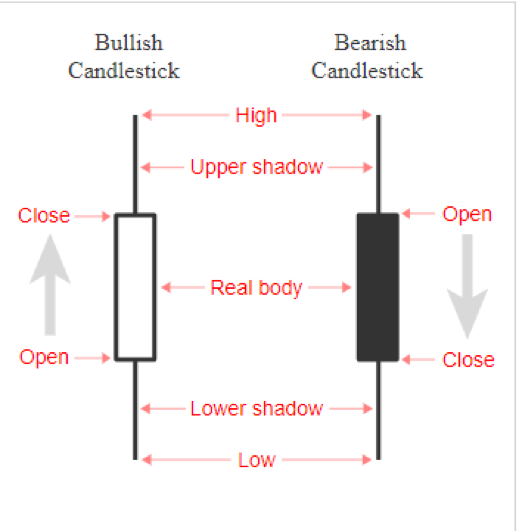 Here are the top 7 patterns every forex trader must know.

This candlestick pattern has an almost zero range between the open and close prices. However, the highest and lowest price points may be significantly far from each other. The Doji has 4 variants: traditional, long-legged, dragonfly and gravestone.

The Doji is a sign of indecision in the market. But when viewed alongside other candlesticks, it could indicate that buyers or sellers are gaining momentum for a continuation in trend. 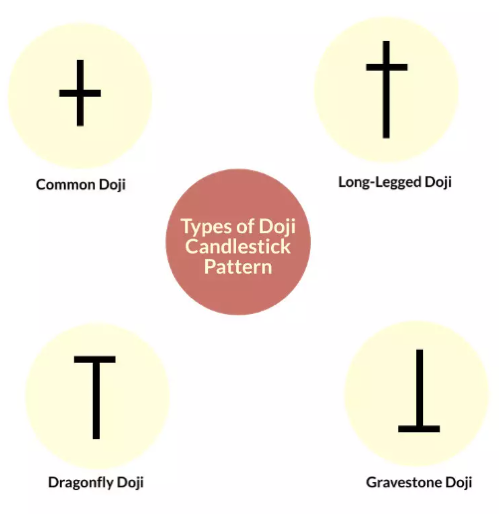 Using momentum indicators to confirm what a Doji is signalling is a common trading strategy.

A hammer is a short candlestick body with a long trailing wick indicating the lowest price, with some movement between the open and close prices. A hammer occurs at the bottom of a downward trend. The identifying characteristic of a hammer is that the lower wick is at least twice the size of the body of the candle. Hammers generally have no or negligible upper wicks. 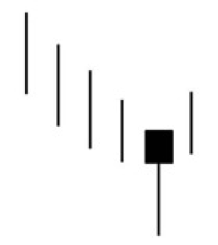 A hammer is a trend reversal signal. That means a hammer indicates a rally. Most traders opine that whether the hammer is bearish or bullish is insignificant. A trader can enter a long trade with a stop loss below the hammer to achieve a positive risk-reward ratio.

A shooting star is the vertical mirror of a hammer. It occurs at the peak of an uptrend and consists of a candlestick with a long upper wick, implying resistance to further bullish movements. Most often, a shooting star is a bearish indicator. It signals an impeding downtrend. 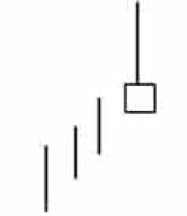 A bearish candle next to a shooting star signals an entry point for traders willing to go short. Traders often place a stop loss above the upper wick of the shooting star candle. Take profit levels can be set at a previous support level to ensure a positive risk-reward ratio.

Tweezers are two-bar reversal patterns. A tweezer occurs when two consecutive periods have the same support and resistance levels with very small wicks in the direction of the trend.

When the overall market is trending, a tweezer during a pullback is considered a signal to enter. A stop loss for a bottom pattern is placed below the tweezer lows and for a topping pattern, above the tweezer highs. Profit targets are determined by other market factors.

This is another two-candlestick pattern that indicates a bullish reversal. For a bearish market, a bearish candlestick is followed by a bullish candlestick. The second candle opens at a lower price but closes at a price above the middle of the previous candle. When a later candlestick crosses the high of the two, it is taken as confirmation of a trend reversal. 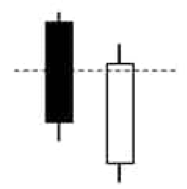 Traders often open a long position after noticing the bullish candle and place a stop loss around its bottom.

A dark cloud is the opposite of a piercing pattern. It is found at the peak of an uptrend and indicates a bearish reversal. A bullish candle is followed by a bearish candle. The top of the bearish candle lies above the top of the previous one but closes lower than the middle of the bullish candle. A confirmation, in this case, comes when a candlestick breaches the bottom of both candles. 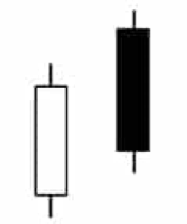 Traders need to focus on understanding trader psychology behind the pattern formation. A candlestick or a pattern only reflects the market sentiment. It is paramount that one understands that charts alone cannot accurately predict market movements. Hence, experienced traders remain vigilant about news updates and calendar events that may move the markets.

An engulfing pattern occurs when a bullish candlestick completely engulfs a bearish one and vice versa. In this scenario, the high and the low of the first candle fall within the top and bottom of the second candlestick.

When a bullish candlestick is followed by a bearish one, it is considered a bearish engulfing pattern. This indicates increased activity of both bulls and bears in the market. Amid an uptrend, it indicates the onset of a bearish trend. However, in the case of an upward-trending market, its effect is generally unknown till another pattern is available for confirmation.

The case of a bullish engulfing pattern is the opposite of a bearish one. It indicates a trend reversal during a declining market.

The size of the bearish candle indicates the strength of the momentum. FX traders take short positions with a stop loss just above the top of the two candlesticks.

After pattern confirmation, traders tend to go long, with a stop loss below the low of the two candlestick patterns.

All data, information and materials are published and provided "as is" solely for informational purposes only, and is not intended nor should be considered, in any way, as investment advice, recommendations, and/or suggestions for performing any actions with financial instruments. The information and opinions presented do not take into account any particular individual's investment objectives, financial situation or needs, and hence does not constitute as an advice or a recommendation with respect to any investment product. All investors should seek advice from certified financial advisors based on their unique situation before making any investment decisions in accordance to their personal risk appetite. Blackwell Global endeavours to ensure that the information provided is complete and correct, but make no representation as to the actuality, accuracy or completeness of the information. Information, data and opinions may change without notice and Blackwell Global is not obliged to update on the changes. The opinions and views expressed are solely those of the authors and analysts and do not necessarily represent that of Blackwell Global or its management, shareholders, and affiliates. Any projections or views of the market provided may not prove to be accurate. Past performance is not necessarily an indicative of future performance. Blackwell Global assumes no liability for any loss arising directly or indirectly from use of or reliance on such information herein contained. Reproduction of this information, in whole or in part, is not permitted.